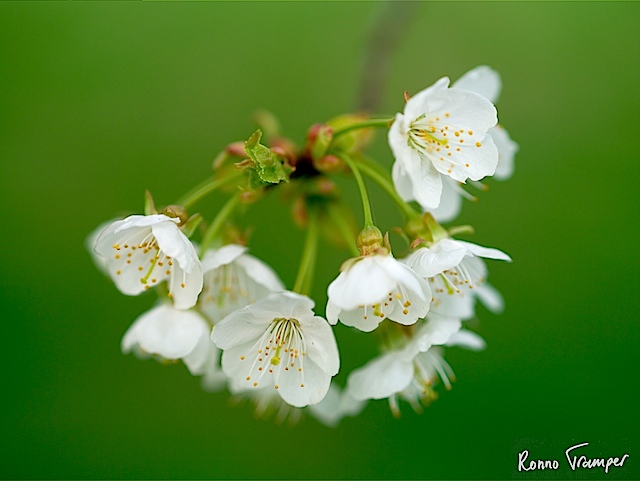 The image of the Cherry Blossom was made using the Olympus f1.8/45mm prime almost wide open (f2). Trying to achieve a depth of field this shallow of course introduces some problems focusing. Focus, I mean what exactly is sharp and what isn't, is very critical in an image like this. The image was made handheld using manual focus (pre focused at a certain distance). In order to get focus in the right plane you have to move the camera forward and backward while looking in the viewfinder (in this case the EVF of the G3, but it is basically the same for DSLR's). Judging sharpness in an EVF is a bit of a trial and error affair. Shooting images like this in the field you will have to use this method for focusing and make quite a few images in order to get some decent results. A light breeze was constantly moving the branch of the tree. Even the slightest movement of the subject will spoil the shot if you only have a couple of millimeters depth of field. It would be entirely different of course if this were a studio shot. In the studio you can simply use the 10x magnification in the viewfinder or on the screen on the back to focus on a stationary subject (tripod, no breeze).

"Bokeh" is the Japanese word for "blur" and among photographers it is generally used for the way a lens renders unsharpness. Some lenses render unsharpness very nervously, which is not very pleasing to look at. The Olympus 45mm prime (for m4/3) is a good performer in that respect. Nothing really special, but certainly OK.

To be able to get close enough to the subject I used the Nikon 4T close-up lens, since the Olympus will only focus to 50cm by itself (see image below). With the 4T it goes down to about 20cm (image area approx. 5 x 7 cm). The lens hood shown here was in one of my drawers with unused pieces of equipment. I gave it a new life when I bought the Panasonic Leica f1.4/25mm. The original lens hood cannot be reversed. I hate that, lots of lens hoods taking up space in my camera bag. Using the right adapter rings I can use the same lens hood for several lenses. And this one isn't rectangular, so it can be reversed. By the way, it is not as big as it seems. That's just the perspective of the image. 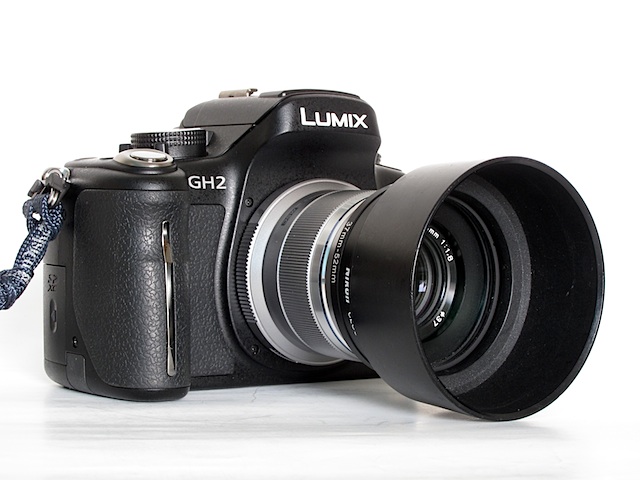 Panasonic GH2, Olympus f1.8/45mm, 37 → 52mm adapter ring,
Nikon 4T close-up lens and screw in lens hood
Made with the Canon S90, I use it for all my website product shots; incredible depth of field) 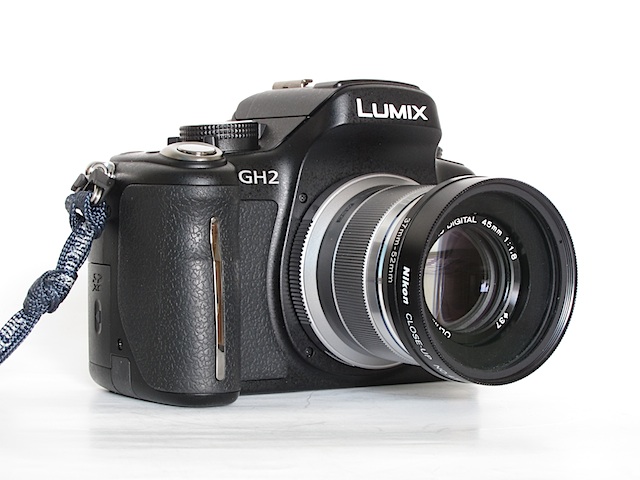 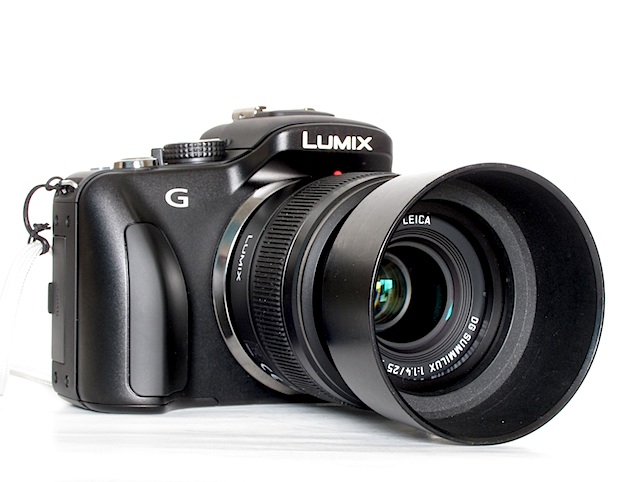 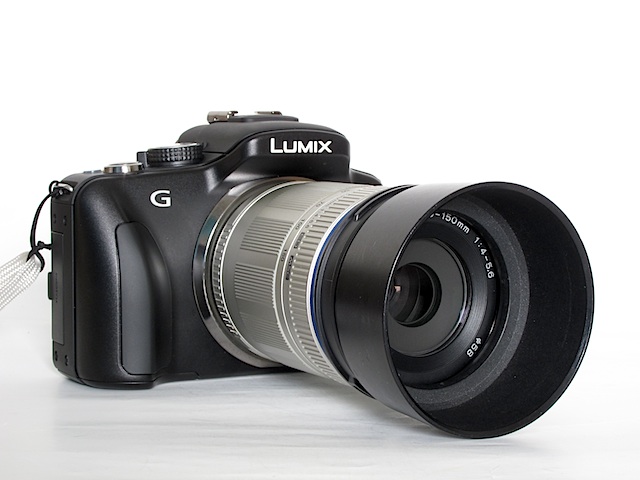 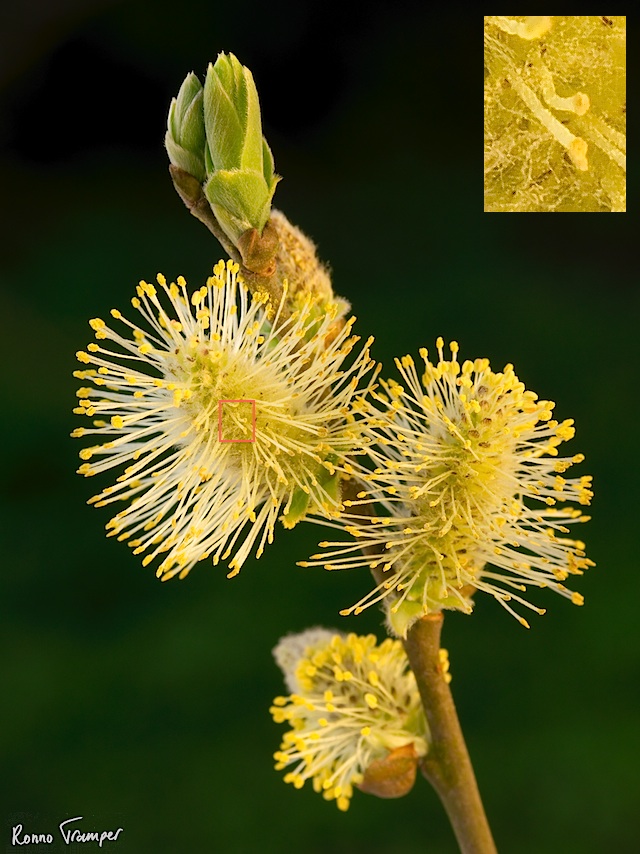 This is a bit of a studio-like shot. I have a willow in my back yard. I cut of a small branch and put it in a little vase with water to prevent wilting. The sun was shining (midday), so I used a diffuser to block direct sunlight and a gold reflector to get some warm (less harsh) light on the subject from the opposite side. As you can see sharpness using this Nikon close-up lens on a relatively cheap (but optically very good) zoom is much less of an issue than most people think. Most of it comes down to working accurately: tripod, selftimer, proper focusing, getting the important parts of the subject in a plane parallel to the camera back and stopping down to f8 or f11 for adequate depth of field. Of course the quality of the close-up lens counts, but a Nikon 4T (discontinued as far as I know), a Canon 500D (stil available) and probably also the new Panasonic DMW-GMC1 Macro converter (I did not test it!) will do the job. Mind you, cheap ones will not! 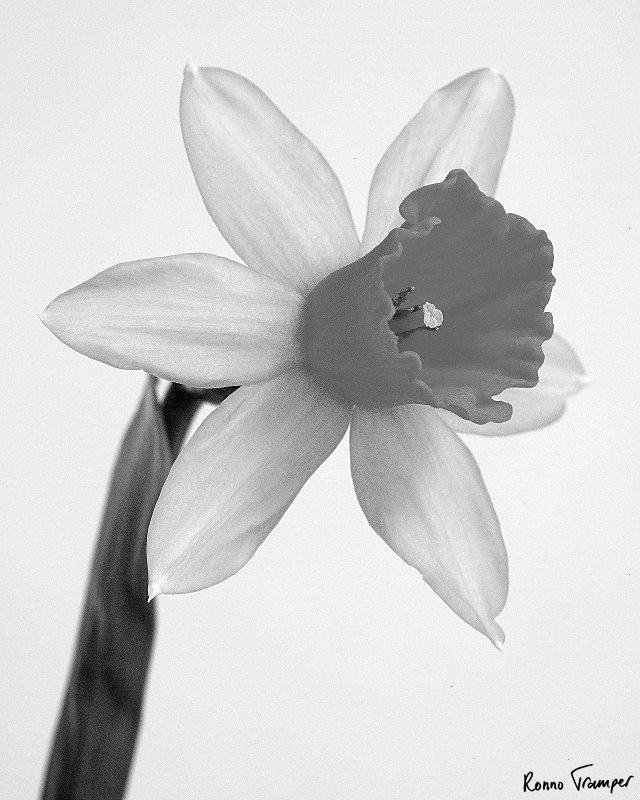 I am a typical color photographer. I think I can safely say that I have never before even experimented whith black & white photography. This photograph is actually the result of a mistake (clicking on the wrong category in my raw conversion software). It struck me how this image resembles a pencil or charcoal drawing. 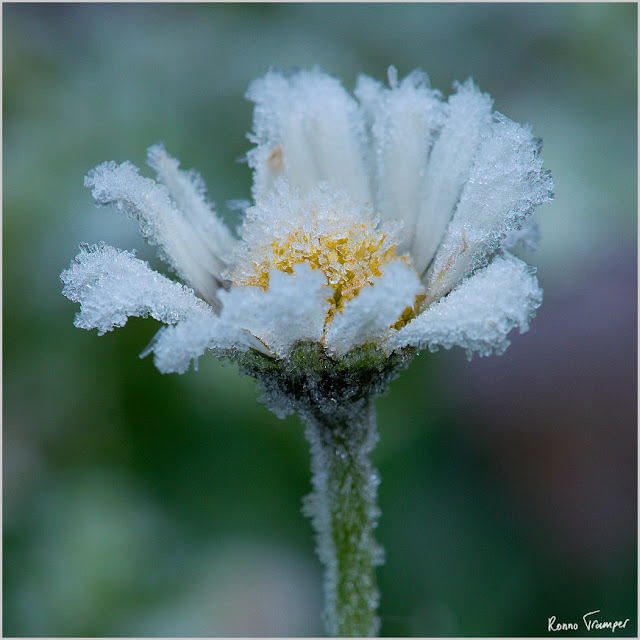 After an unusually warm autumn and start of the winter the daisies were still standing in our garden. I made this yesterday morning after a cold night. Shooting the 45-200 + diopter at 150mm and f16 on the GH2 effectively makes this a 300mm/f32 (!) macro shot (full frame equivalent). Considering that it is pretty sharp. Everybody is talking about the 4/3 cameras being diffraction limited at apertures of f8 and more. I wouldn't worry about it all that much. Depth of field is more important here. As you can see "bokeh" (the rendering of the out of focus background) is not a problem either in low contrast circumstances like these. 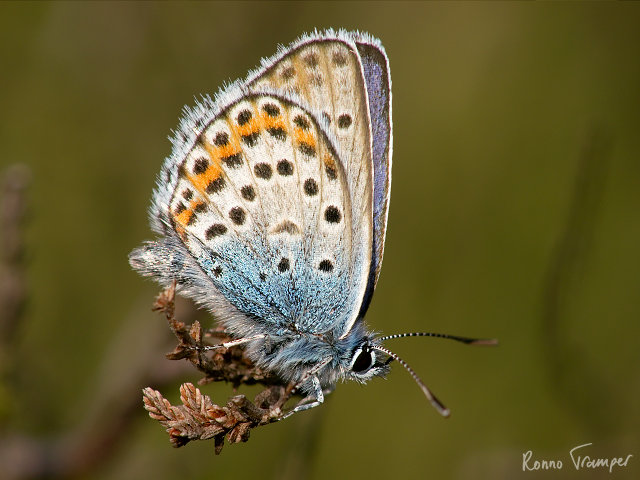 The image of the silver studded blue was made using a mediocre lens with a diopter (close-up filter) on the Panasonic GH2. Dedicated macro-lenses are either too short and expensive for my taste (Leica 45mm for m4/3 and Olympus 50mm for 4/3) or non-existent. So you have to improvise. I own a Sigma 3.5/180mm APO Macro for Nikon and a m4/3 adapter. So I could have used that lens. But I wanted to try a few other things for which I needed AF and image stabilisation. What I tried, shooting handheld using AF-C mode combined with AF-tracking and IS, did work to a certain extent. I got reasonably sharp images and AF-tracking kept the focus where I wanted it. But shooting like that, handheld, required fast shutterspeeds and consequently shallow depth of field. Additionally f5.6 is by far not the sharpest aperture using the combination of the Lumix G 4-5.6/50-200mm + Nikon 4T diopter at 200mm. You really need to stop down to f11 for optimal sharpness.

The image shown was made the old fashioned way: tripod and manual focus. It is possible to make very sharp images that way, even though the combination of this lens and the Nikon diopter sounds a bit "iffy". Several others have pointed out though that sharpness depends primarily on the skills of the photographer. The amount of detail that you see in this 100% crop is easily enough for a 13 x 19 inch print (if not a little bit larger). 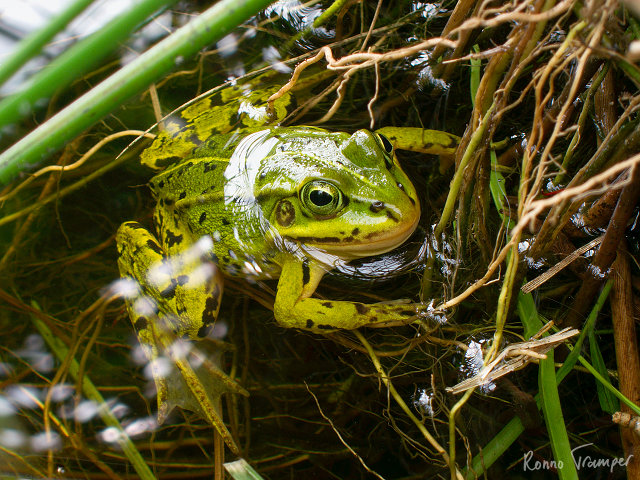 Walking in the Duurswouder Heath, I came across this frog. And, as always when you see a photo opportunity, I had nothing but my Canon S90 with me. Not exactly the piece of equipment that you want for macro photography. Normally I wouldn't even have tried but this individual didn't seem very wary. I started shooting, came closer and closer and ... it jumped into the water. Just half a meter away it kept staring at me. So I started to approach it again, the Canon compact close above the water (wrist strap, fingers supporting the bottom and my thumb on the shutter-release button). In the end I got away with a shot of the frog at less than two inches from the front lens. What is so amazing about it, is the incredible depth of field and sharpness at 100%. Other than that it is not a great photo, of course. 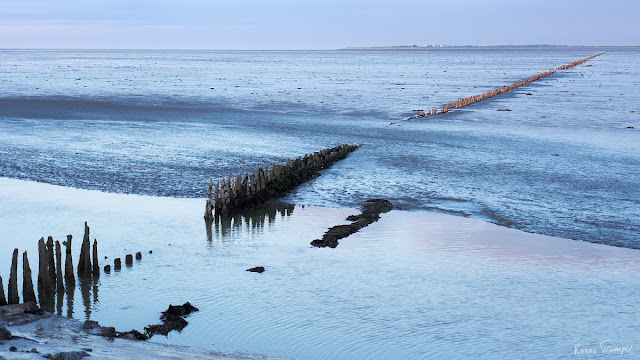 The area outside the 40 feet high dyke protecting the twin villages of Paesens-Moddergat is one of my favorite places in this part of the world. Probably because it is a vast open space in an overpopulated country. Last night it was very quiet after a storm the previous day. The landscape of the Wadden Sea (Unesco World Heritage) changes on a day by day basis. It's never the same. So much beauty, free for all to visit and still there's hardly ever anyone there. A larger version is available here. 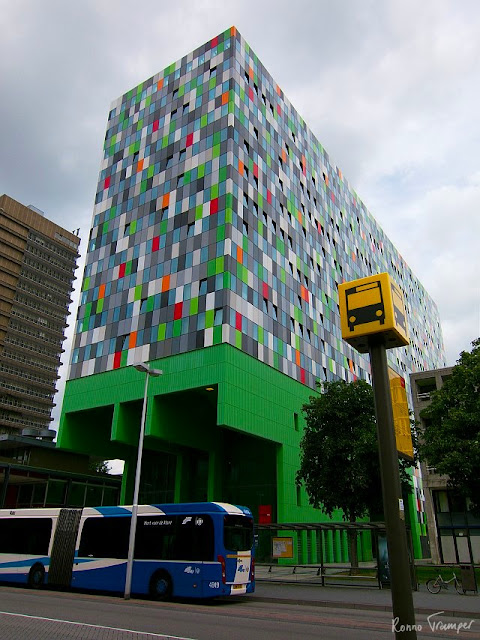 I regularly walk past this piece of architecture, appropiately called "Casa Confetti". Today I noticed the way it was standing out in an otherwise grey world.